LIONKILLER is a choose-your-own-adventure game made in Twine. Play as Hua Mulan, who is conscripted into the First Opium War against the British Empire. Run a flower shop, kiss a girl, shoot a matchlock rifle, and uncover a military conspiracy! Your actions will lead you to one out of four different endings. Will you get the girl, or will you die an inglorious death?

Instructions: Unzip the file. Double click the "index" file (it is an HTML file) in order to start the game.

Gameplay tip: There's more queer content if you choose to eat lunch in the store.

Content warnings for misogyny, mentions of drug use, mild sexual content, and descriptions of violence. There are also negative sentiments expressed towards drug users, which is not shared by the developer.

All the parts have been compiled into one file. Simply download the file, extract the file, and then open in the browser. You must extract the file instead of launching directly from the zip file, or the images will not load. Please let me know if anything is broken! I am dedicated to patching any bugs that might arise.

If you're a member of the press, then please see this press kit.

Parts 2 and 3 are funded by Tap by Wattpad. The game is also available on the Tap by Wattpad mobile app on the Play Store and App Store.

If you have trouble affording the full price, feel free to email me for a copy. No questions asked.

In order to download this game you must purchase it at or above the minimum price of $10 USD. You will get access to the following files:

Is the full game on tap ? Or just the first part because I’m at the part where like the general is helping me practicing my shot and it’s not giving me an option to move on 👉🏽👈🏽  I really enjoy this game and I’d really really want to continue playing it. It’s often I can emerge myself in a story like this

i think i got one end, because the last word was, obviously, "END." but the only other ending i got was the one where "You dash for the streets outside." which didnt finish in "END." so it makes me think i didn't actually get an ending? wish there was a full walkthrough (i'm also interested in how the zodiac and the planets factor into the endings), i wanna marry An

Hi! I'm really loving the game so far. I just reached a passage in Part II where I chose to take a bit of "dirt" from Wen's bag after it broke. There's an error message:

Sorry! In Part III, when you follow Wu and it asks what you'll tell the children as Uncle Lan, there's another error message, and all you say on the next passage is "0."

hey! i was replaying to find different endings, and i found that if you leave town with wen, you go through the matchlock gun tutorial with wu anyway, and afterwards he calls you an and mentions events that happened when you meet him (in the passage marchontopearl (set: $following to "wu") appears so the route w/ wen isn't available). is this intentional..?

I checked the back of the game, and there's no way to experience both the gun tutorial and the horse riding tutorial in the same playthrough (they do not have any connecting links). marchontopearl also does not set any conditions, it only provides the divergent paths. Could you describe what happened in your playthrough? What did the characters say? Diverging events in part 2 are set completely in stone depending on whether you met Wen or Wu during your conscription, and you can only re-select your allegiance when the viceroy falls from power.

AND SOMEHOW EVERYONE WHO'S EVER PLAYED IT NEVER NOTICED

STILLNOTSTARS I OWE YOU A GODDAMN DRINK

+ also, this game slaps. the writing is just wonderful-- i adore the way the text shifts meaning as you click on it. i was reading the comments and your description of the game as neither pro-chinese or pro-british but pro-mulan, and that just encapsulates a lot of my feelings as a chinese american who has a weird relationship with that identity.

i intend on playing the hell out of all the routes esp now that theres an entire other branch :) its so well done, thank you

Hi! Is the game in English only?

Totally understandable, thanks for the reply!

Love it, though I've run into a few issues, particularly with saving and in some cases hitting a dead end. I want to chew on this slowly but it seems my browser doesn't properly maintain progress? Anytime I reload it it starts over. :(

Hi! Could you please tell me where you managed to hit a dead end?

The saves were originally used for reloading alternate routes, and are a feature that I forgot to remove after final release. I will be sure to remove the feature when I have time.

The last sentence before the missing link is "You dash for the streets outside ."
I can see some hidden text in the page source "空白" but it looks like a conditional expression is hiding it and there's no alternative. Not sure if there's a way I can tweak it so I don't lose my progress.

Can you tell me about all the decisions that you made up to that point? Which man you sided with, whether or not you collected the evidence, and whether you had to sneak into the meeting (versus being invited)?

IIRC I sided with the Wen, I think I collected evidence, and I snuck in. Sorry that my memory isn't the best. I'm in the middle of a parallel playthrough and will see if I can reproduce it. :)
Side-question: Is the game intended to be played in one sitting, or are you supposed to be able to close it and continue it later?

I was able to repro with a substantially different path. One correction: I chose Wu on both playthroughs, but it looks my path/options changed due decisions that predate that. This time I had the softcore option, but did not have the option to sneak in or take evidence. I still ended up on the same dead end.
I also found a minor conversation loop that I didn't notice before in my first conversation with Fang.
I'm really astonished by the narrative complexity and think this is really special, so I hope highlighting flaws isn't too much of a downer.

I've never used Twine before but I might be able to lend a hand with troubleshooting if I could see the source content. I'm used to spinning up on new tools and troubleshooting games in a professional capacity. You can reach out to me directly if that's of interest. Same username on Twitter.

Hey! I ran into the same flaw: thanked Fang but didn't bribe him, sided with Wu, had the softcore option but chose to ask questions, told Fang I'd marry a girl, refused the pipe, asked to talk, told the Major to "be better." The passage ends with "You dash for the streets outside."

In case I sent you on a wild goose chase with "空白" I think what I was actually reading was an empty text node. I forgot my browser was Japanese and since some of the game has Chinese characters I mistook them (since they're valid in both languages). Oops? Haha.

I've been wrung too dry by life to give this amazing game the full review it deserves, but I want to say THANK YOU for making this.

As a Chinese diaspora in a former colony of the empire, I am caught between three worlds: an inheritance I cannot claim, a home that calls me a foreigner and an island with selective memory. All three worlds question my humanity, my choices, my desires and my labour, and it brings me great relief to know that I am not alone, and that stories like mine are worth telling after all.

i really enjoyed this, thank you so much for making it! i loved the pacing and how it made me feel like i was visualizing what happened in my mind, vs reading a novel

Lionkiller is a very beautiful game. I left it more curious and mindful than when I started it. I can't recommend it enough. Some people might think this is a niche experience and turn away from it accordingly, but I can assure you that it's not. Play this game. It's really just super cool.

As a gay Chinese woman born in a territory colonized by the British after the Opium Wars, who grew up with verses of the Ballad of Mulan at the tip of my tongue-

This is a fantastically designed, beautifully told story. Upon reading your post-mortem, I see how much work you put into making the game flow, and it really did. As I read, time passed like nothing at all, and the changing of text in the same sentence such as from "every family has a son" to "every family has a disappointment" was particularly powerful. The emphasis on bound versus unbound feet, the dreams of Peking Opera, the use of Chinese zodiac signs for stat distribution all hit somewhere deep and at home in me that I never realized I wanted.

One thing I noticed was the way that stat increases were marked by the blessings of planets such as Mars and Venus. At first, I was a little bemused by the fact that despite being such a culturally Chinese game, you used the Roman, western astronomical names of the planets instead of Chinese astronomical terms. But at the same time, this little design choice, whether intentional or not, conveyed the sense of the times, with Chinese and Western sensibilities clashing in combat, and the encroachment of the British.

There's lots I could say about this game, but most of all that I long for more of it. It is merit to your design that 7000 words felt so, so short that I found myself repeating the chapter over and over again trying to wring out every last bit of text that I could, and it is a compliment when I say that it still wasn't enough. I wish you all the best in the project in the future, and I hope you get the support and finances to be able to finish it.

I'm dead. I can't believe you played this game more than twice because I remember thinking "I would be so lucky if someone played both branches" like WOW THANK YOU

I really appreciate the feedback because I've always imagined LIONKILLER as a game for people to chew slowly! I was surprised that some people found the pacing to be fast, since I like to think that the text is quite dense (Which I credit to my bilingualism. You know written Chinese is efficient and conveys many layers of meaning!). I think most games underestimate how much player time is typically spent "waiting for something dynamic to happen" so I'm glad that you didn't feel like I was wasting your time.

I didn't want to make an "authentically" Chinese game. First of all, I didn't grow up in the mainland. Second of all, "authentic" Chinese historiography trends very male and conservative. I was interested in neither of those things.  I think, from my personal experience only, the original Ballad of Mulan is not very empowering. Sacrifice is not empowering (especially for marginalized people), and I tried to provide choices in the game that did not necessitate virtuous sacrifice.

Thank you for playing! 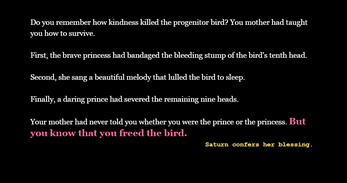 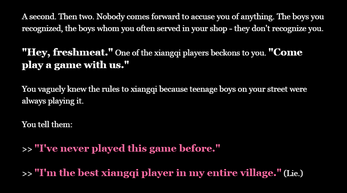 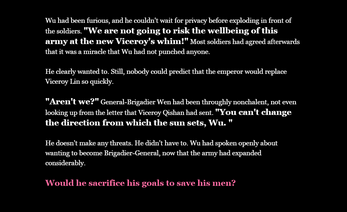 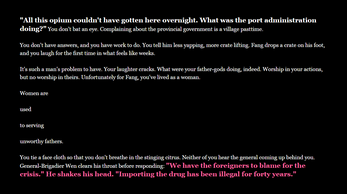